100th Anniversary of the Landing at Anzac

Today all over the world, Australians and New Zealanders commemorate the anniversary of the landing at Anzac on 25 April 1915. When I attended the Dawn service this morning I reflected upon the sacrifices made by the men and women that have served our countries in all wars and conflicts. However I could not help thinking about the men and women that served with the No 1 Australian Stationary Hospital. Whilst the hospital did not initially land at Anzac (it did later in November 1915), it did significantly contribute to the war service in the early stages of the campaign by tending to the wounded and ill on the island of Lemnos. The hospital was officially equipped and manned to cater for 250 casualties but looked after over 1000 casualties in the middle months of the campaign. These men that worked long hours in terrible conditions must have been resilient and mentally tough to do what they did. Morale would have been a challenge for the leadership team of the hospital.

However there must have been times during the campaign that morale was given a little boost by a specific event or a visit by a ‘celebrity’. One such visit occurred in August 1915. As a new offensive on the peninsula was under way, some of the men of the No 1 Australian Stationary Hospital were extremely fortunate to spend some time with Australia’s first VC winner from Gallipoli – Albert Jacka. He had been admitted to another hospital suffering Gastritis (inflammation of the stomach lining) on the 25th August 1915 and when well enough was able to visit a few of the men of the No 1 Australian Stationary Hospital. This ‘once-in-a-life-time’ visit was captured on film; a photo that was treasured by all who were in it (relatives from two of the members had a copy of this photo). It was a small event that would have lifted morale and the spirits of the men at a time that was normally surrounded with death, disease and illness. 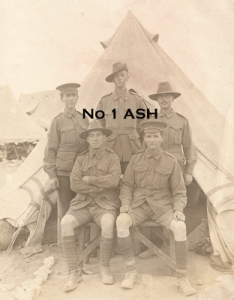 Photo of four men from the No 1 Australian Stationary Hospital with Albert Jacka VC.